How to configure and use the Gateway module¶

The Gateway module implements a "zero-downtime-upgrade" feature in Z2. Specifically, it uses the worker process management of Z2 in conjunction with an intermediate reverse proxy style Web handler to implement the following feature:

Upgrading a stateful Web application, i.e. a Web application that stores user data in its HTTP session typically implies downtime, and if the session state is not serializable and persisted during the upgrade, it does additionally imply that user state gets lost and typically that users need to log on again.

Using the Gateway, running sessions may be preserved and worker resources may still be assigned on the current software revision for as long as there are running sessions during a node upgrade and until all sessions have been terminated. The typical application of this feature is to roll out functional and user interface corrections without interrupting users. Users can switch over to post-upgrade software by terminating their session (e.g. via a log out) and starting a new one (e.g. by logging in again).

A sample on how to use Gateway¶

A sample can be found in the z2-samples.gateway repository. Install as follows:

On Mac-OS or Linux run:

On Windows download the archive and unpack using the Windows explorer. Make sure to unpack into the installation folder previously created.

This will create a folder z2-base.core that contains the complete version 2.9 z2-base installation.

Check out the sample

On Mac OS or Linux run:

(In order to check that z2 is up, when you see "Completed home process initialization", try http://localhost:8080/adm with user "z*" and password "z".)

Check out the environment module (that typically holds all configuration regarding the "environment" of the application - such as database connection and Web server configuration). This module is holding a Gateway configuration as described below. After re-starting your Z2 installation, try the following: 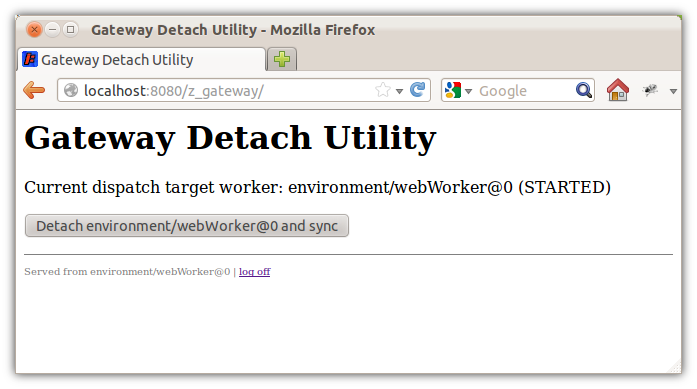 2. Open another browser window and navigate to http://localhost:8080/adm (same user). Choose the group "Workers" and update.

Check for the current worker process and their state. You should see something like this:

That is: One worker was detached while another one is in state started.

Finally, if you wait 30 minutes until the session of the admin user interface has expired, also environment/webWorker@0 will terminate.

The sample configuration in z2-samples.gateway has a pre-configured Gateway setup. Here is how this differs from a regular non-Gateway setup:

In order to enable this Web server, uncomment the system state participation in environment/gateway/z.properties as done in the sample.

The Gateway Web server is configured in environment/gateway/jetty.xml. This is a regular Jetty configuration. Instead of being an ordinary Java Web container all requests are handled by a special Gateway Jetty handler.

The only part of this configuration that could be of interest to be changed is the normal connector settings (ports and concurrency) - just as you normally would tune your Jetty Web server - and the name of the worker process that is to receive the forwarded requests - the Web worker process. The latter is defined in this section:

Unless you want to change the name of the target worker process, you do not need to touch Gateway's jetty.xml.

In order to facilitate that, the Jetty configuration for the instance running on the Web worker is modified to use the GatewayServer rather than the normal Jetty Server implementation class. This GatewayServer class computes the internal localhost port for proxy to web worker communication and communicates additional metadata on session usage to the proxy server of the Home process.

In terms of configuration we change the web server component descriptor to include z2-gateway.xml and z2-gateway-http.xml rather than jetty.xml and jetty-http.xml

The main difference is a) the use of

(z2-gateway.xml) and b) the use of a Gateway connection factory (z2-gateway-http.xml):

Finally, in order to actually trigger "Detach & Sync", you should enable the Gateway user interface by adding a dependency to com.zfabrik.gateway/web to environment/webWorkerUp.

On every Web worker process there is another Web server that accepts requests forwarded from the Home process and subsequently treats them as if they were ordinary HTTP requests in the first place.

In other words, if a worker has no open sessions and is being detached, it will terminate itself right away.

That is why the Gateway user interface will not only detach a worker process but also trigger a synchronization. Here is a diagram illustrating the flow from detach and sync to worker process termination:

The port configurations in worker process components are:

Updated by Henning Blohm about 2 months ago · 16 revisions