How to create your own system » History » Revision 6

How to create your own system¶

This Wiki is on the task of creating a complete system of yours. I.e. to set up a development of your own solution based on the z2-base system.

Note: This is not needed to run the samples or to check things out. This is only useful, if you wish to start

Fortunately, the actual things to do a are few and simple.

On the other hand, repositories have a priority (more on that below) that determines what repository has the right to say what a module contains.

Based on that mechanism you can construct a system definitions that consist of as few as one repository (if we do not count the core) or many repositories of which some are even shared between systems.

Before moving forward on that, let's have a look at the add-ons.

Add-ons (see Add-ons) add more functionality to Z2. Generally speaking, an add-on is a regular Git or Subversion repository that holds one or more modules and is incorporated into a z2-Environment defined system via a component repository declaration (see Components and Component Repositories).

In other words, technically there is nothing particular about add-ons. It is the way they are used that is noteworthy. The idea is that you can pick the add-ons you need and add them on top of z2-base. Previously Z2 was available in distributions. Now you take z2-base and add what you need on top.

Add-ons provided on z2-environment.net are versioned just like z2-base, so that there is no complicated version vector. Also add-ons have some documentation in the z2-Environment Wiki and come with some samples.

It is a best practice to encapsulate all system-specifc configuration in a module called environment. Also the repository z2-base.base contains an environment module (exactly here).

The environment module is one of the preferred places to add a repository definition. Although, in your case, in a scenario repository.

Another useful place is the Local Repository.

Such a setup consists of a z2-base.core (or a clone or a copy – in all cases from here on) and a z2-base.base plus zero or more add-ons, and one of possibly many scenario repositories.

The Scenario Repository has an environment module that has definitions for all other add-ons used in the scenario.

Here is a schematic overview: 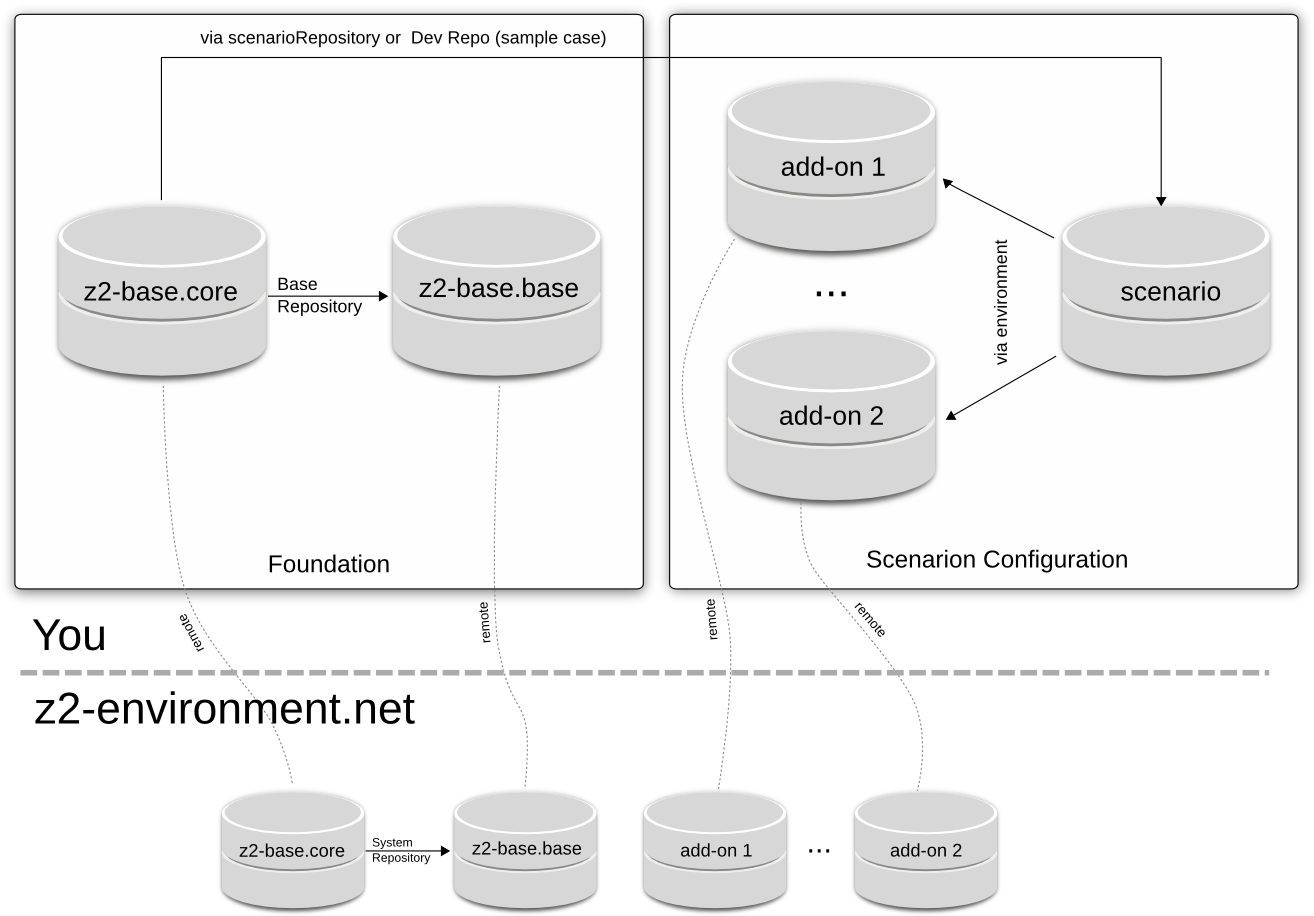 Sounds complicated. But in reality, it's really just filling the scenario component repository definition. The samples in z2-environment.net work almost exactly the same way. The difference is that we do not use the extension component repository but rather the Development Repository.

The effects of this setup are:

This is somewhat crucial. There is no meaningful way of using Z2 without a base repository like z2-base.base.

You can run many scenarios with shared add-ons

By only changing the scenario repository definition you can control a complete application system definition that is implemented on a Z2 Home - while still sharing all Add-on and base repositories.

You can leave repositories from z2-environment.net untouched

As you only re-use, typically you will not need to modify repository content unless you apply bug fixes and the like. That separates cleanly what is yours, what is from others.

Updated by Henning Blohm about 9 years ago · 6 revisions