The z2 Unit feature of z2-base.base allow to run in-system tests on z2, from anywhere where you can run JUnit tests. To learn more about the JUnit testing framework, please visit http://www.junit.org.

There is a ready-to-use test project, the most simple project with a test class like the one above really. To try that: 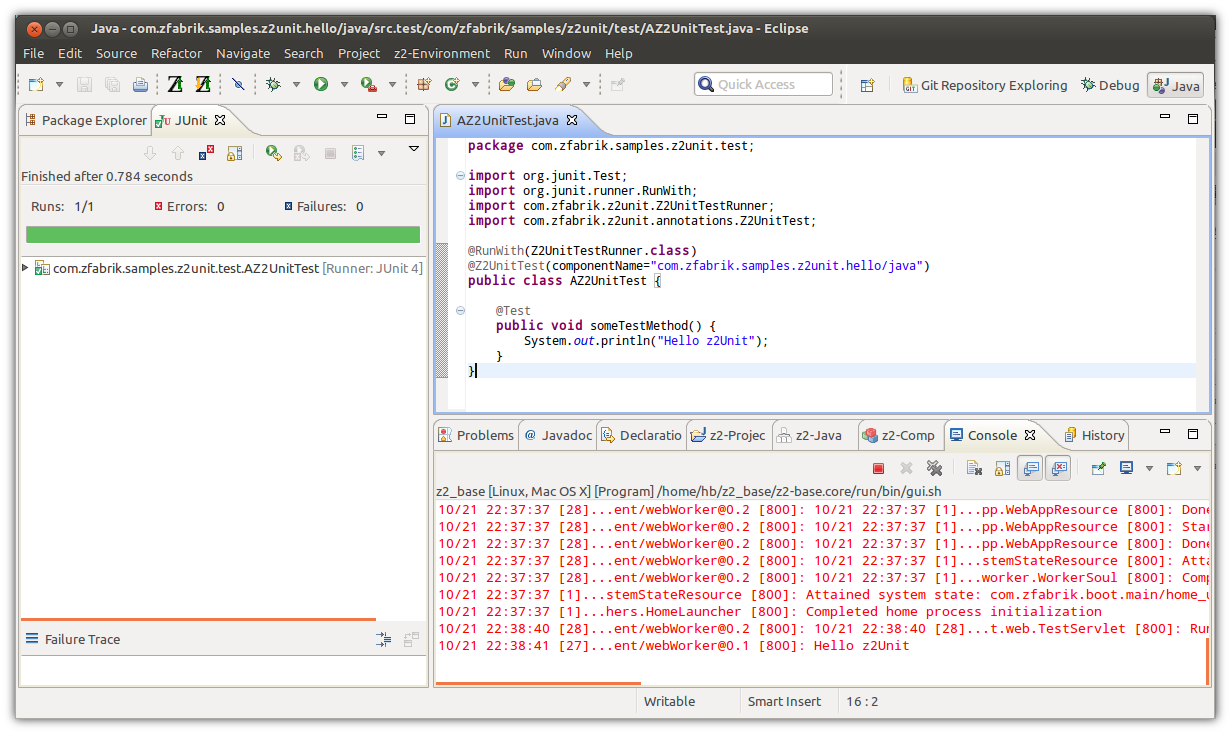 If you want to automate tests and cannot rely on the Eclipsoid to have a suitable class path, you should use the com.zfabrik.dev.util/jarRetriever tool to retrieve all required dependencies. In that case, you can run z2Unit tests just as any unit tests also from an ANT script for example. A typical application is to run z2Unit integration tests as part of your test automation effort.

The execution of a z2Unit test requires the test client, which is the local JUnit runtime invoked by ANT (or your IDE as above) invoking the Z2UnitTestRunner, to connect via HTTP to the Z2 application server. If you run tests on the same operating system instance the application runs on, this works by default by reaching out to localhost. If your application server is on a different machine though, you will want to configure that accordingly.

For example, you could define a different z2unitUrl when configuring the Z2UnitTest annotation.

Instead you can specify essentially the same configuration that the Z2UnitTest annotation holds by setting any of the system properties shown belown during test execution. For example in your ANT script.

Alternatively you can specify these configuration settings by putting a file called, by default, z2unit.properties on the classpath of the Unit Test Runner (i.e. the ANT test execution classpath for example). The name of the configuration file can be overwritten in a test specific way by setting in on the Z2UnitTest annotation on the test class, in case you need many different configurations.

Properties that control the behavior of the Z2UnitTestRunner, and that may be specified as system properties or via the configuration file are shown in the following table:

Using the Z2UnitTest annotation, a test can be configured to run with a non-standard unit test runner. That is useful for example, if your test is actually a test suite or something special like a Spock test. See Sample-groovy-in-Z2 for an example of the latter.

Furthermore, a unit test can be configured to have some runtime dependencies in Z2, i.e. components that should be prepared prior to the test execution. That is extremely useful, if the test depends on a configured Spring application context for example. In the latter case, the test could even use Spring configuration annotations (which is what we typically do).

Read on in the Javadocs for more details.