An introduction to Z2 Java components¶

The one, probably most essential component type, is that of Java components. Per se, modules in Z2 are not "Java modules" (unlike in OSGi for example). From its underlying model, Java code is handled like any other component resource. There is however important conventions that do make Java components special.

If you have not done so, it will be best to read Z2_Modules_intro first to understand the Z2 modularization approach.

Java components play an important role in Z2 modularization, as re-use of code is one of the driving motivations for modularization. Z2 offers a moderately sophisticated way of re-use via inclusion or class loading delegation that is still simple enough that typical Java and Java EE approaches still work without painful adaptations and that you can - in many cases - ignore the more complex, problematic situations.

Therefore Z2 implements a module level convention (and this is actually the only place that the module granularity matters) that is used by component types to identify "the default source of implementation code":

That convention is implemented in JavaComponentUtil and used all over the place.

Before explaining the details of the folder structure, here is some rational:

Another aspect that is in reality at least as important is that APIs effectively (in reality) imply a transitive closure that spans everything needed by the API. Without a clean separation of API and implementation, you do effectively expose also 3rd party implementations used in your implementation which can easily become a major headache due to version conflicts and accidental re-use by users of your API.

There are reasons to not separate API and implementation in a module however. For example:

We do generally recommend to split API from implementation and use the corresponding folder structure, even some folders stay empty.

On top of API and implementation, Z2 Java components support test code. Test code is part of the component's implementation code if and only if Z2 runs in development mode (i.e. the system property com.zfabrik.mode is set to development)

Java components may "include" components of type com.zfabrik.files and com.zfabrik.java. This can be useful for libraries that cannot be shared by just re-using the classes but instead require to be used within the using component's context, e.g. to load classes by name that would not be within the library's scope. This is true for older versions of the Spring framework for example.

Files components may be included as API or impl provisioning depending on the reference used. The included source files or pre-compiled binaries are expected to comply to the following folder structure:

Referencing and including Java resources from other modules¶

Via the following component properties, re-use of Java definitions from other Java components can be controlled:

The following picture illustrates the relationships established via references and includes: 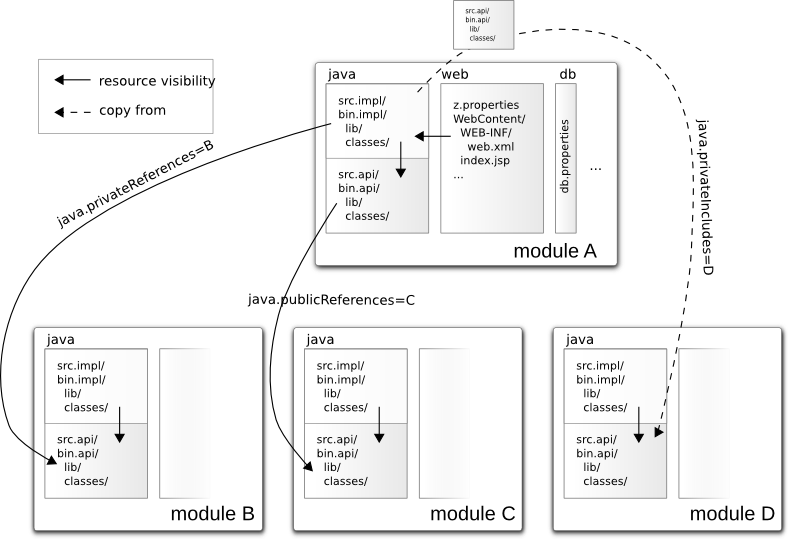 The class loader concept of the Java platform provides a powerful name spacing mechanism on the type system. While in the beginning that seems to be of little concern, in more complex scenarios isolation within the type system in conjunction of sharing of types between modules of a solution becomes the catalyst of successful modularization.

The class loading system in Z2 is based on a delegate-first, multi-delegation scheme. Effectively, a Java component will have two class loaders at runtime. One for the API, one for the Implementation and both ask their delegation targets (other class loaders) first before searching local resources.

Java references that lead to cyclic dependencies between Java modules are not supported.

Apart from refrences and includes, the following configuration properties may be used