How to Unit Test in Z2¶

The Z2 Jupiter feature of z2-base.base allow to run in-system tests on z2, from anywhere where you can run JUnit tests. To learn more about the JUnit testing framework, please visit http://www.junit.org .

The z2 Jupiter feature is built on the JUnit 5 API that succeeded the JUnit 4 API that is the underlying foundation of the previously promoted z2Unit feature (see How to z2Unit). It is recommended that you use the z2 Jupiter implementation today starting with z2 Version 2.9.

At the heart of Z2 Jupiter lies the Z2 Jupiter Test Engine implementation that delegate test discovery and test execution to a running z2 server runtime. That is, although JUnit believes to run a locally defined test class, the actual test execution is performed in another process, running the test methods and reporting results back to the client.

Using z2 Jupiter is as easy as referencing the module com.zfabrik.dev.z2jupiter from the test module and adding one more annotation to your test class: Z2JupiterTestable.

Z2 Jupiter uses itself for testing. You can see a simple "Hello World" test at z2-base:source:base|com.zfabrik.dev.z2jupiter/java/src.test/com/zfabrik/dev/z2jupiter/test/HelloZ2JupiterTest.java :

If you want to use Z2 Jupiter in your projects for tests implemented under java/src.test, make sure to have the framework referenced in java/z.properties like this: 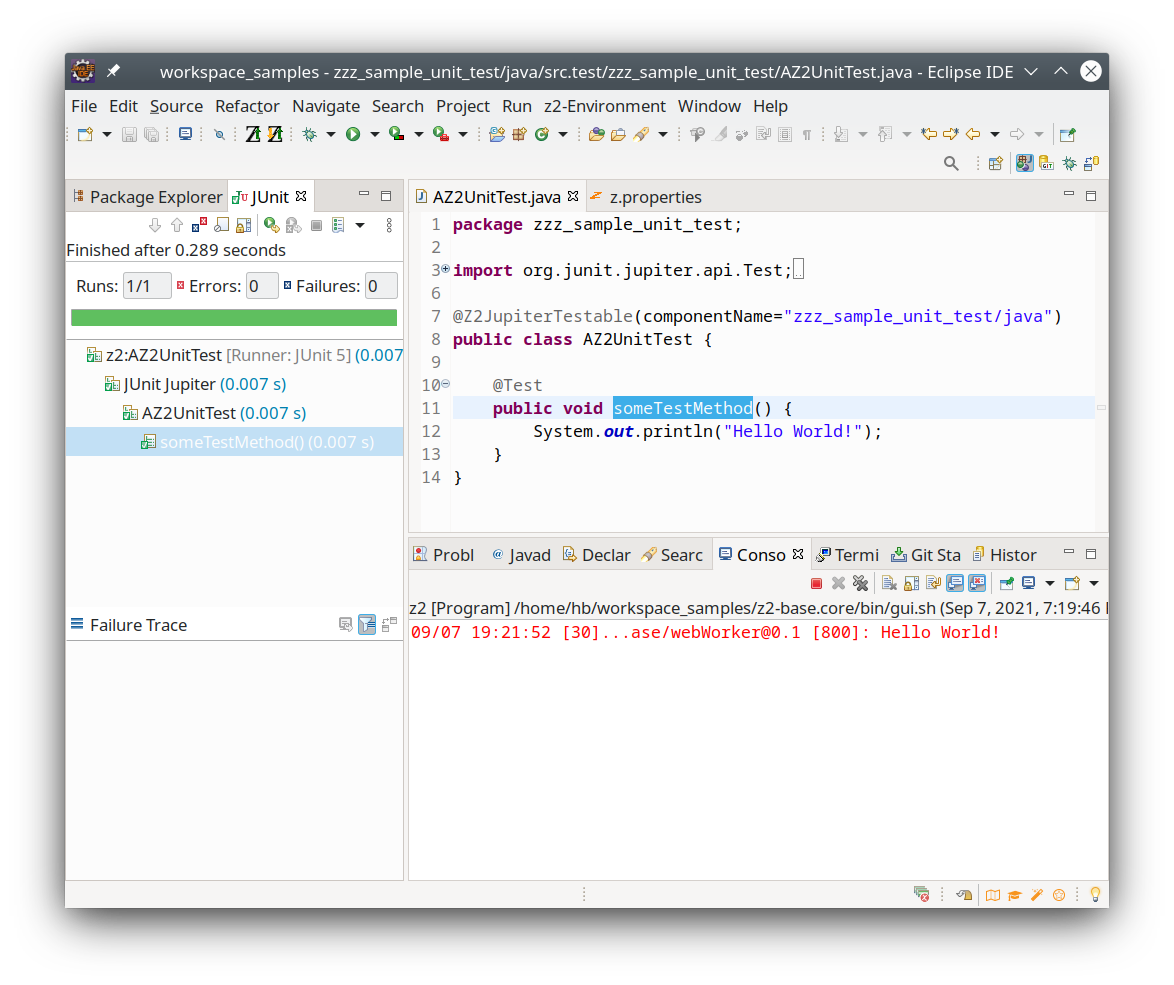 If you want to automate tests and cannot rely on the Eclipsoid to have a suitable class path, you should use the com.zfabrik.dev.util/jarRetriever tool to retrieve all required dependencies. In that case, you can run Z2 Jupiter tests just as any unit tests also from an ANT script for example. A typical application is to run Z2 Jupiter integration tests as part of your test automation effort.

See in particular How to download jars from Z2 on how to integrate jar retrieving with ANT.

The execution of a Z2 Jupiter test requires the test client, which is the local JUnit runtime invoked by ANT (or your IDE as above) invoking the Z2 Jupiter Test Engine, to connect via HTTP to the Z2 application server. If you run tests on the same operating system instance the application runs on, this works by default by reaching out to localhost. If your application server is on a different machine though, you will want to configure that accordingly.

For example, you could define a different URL when configuring the Z2JupiterTestable annotation.

Instead you can specify essentially the same configuration that the Z2JupiterTestable annotation holds by setting any of the system properties or environment variables shown belown before test execution. For example in your ANT script.

Properties that control the behavior of the Z2JupiterTestable , and that may be specified as system properties or via the configuration file are shown in the following table:

Note that connecting to Z2 for remote test execution requires authentication and is by default only accessible from localhost. The Z2 Jupiter test engine for JUnit 5 as well as the Z2UnitTestRunner for JUnit 4 use (by default) the user “z*” for test execution.

See also How to Secure a Z2 Installation.

Read on in the Javadocs. for more details.